Brightly coloured silks counted as a costly status symbol among medieval Europe’s high-ranking clergy and secular rulers. As there was no workshop in the West that could make this kind of cloth prior to the 13th century, they had to be imported from Byzantium, the Orient or Islamic Spain. Thanks to the Christian cult of relics, many of these rare luxury weaves have been preserved. The Abegg-Stiftung possesses a major collection of such early silks. 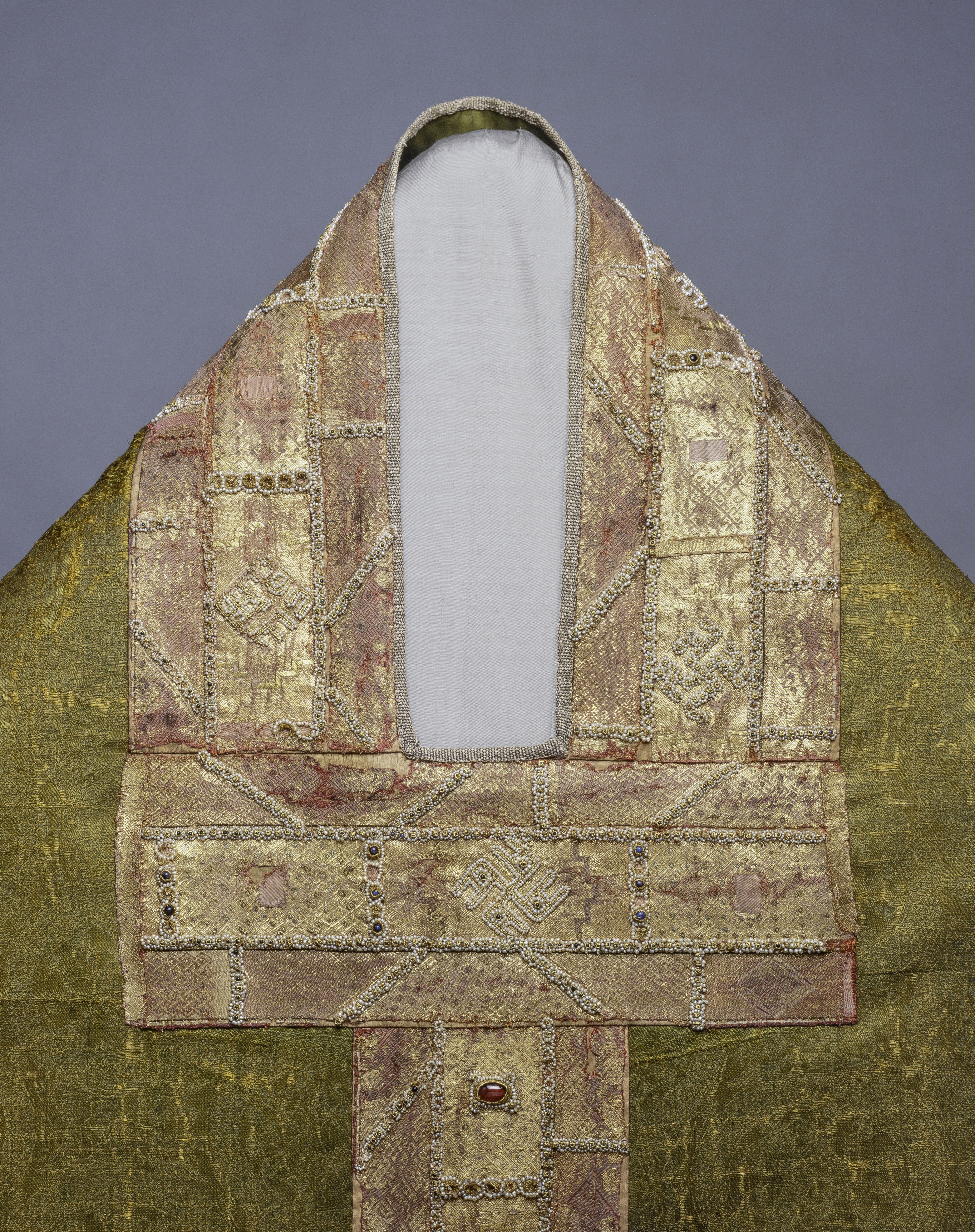 The Chasuble of St Vitalis

The chasuble comes from St Peter’s Abbey in Salzburg, where it was venerated as a vestment of the canonised Bishop Vitalis. The green silk is finely patterned with circular medallions, each containing either a pair of griffins or a pair of panthers. The gold orphreys on the neck and central seam are embellished with semi-precious stones and pearls. The artistry and faraway origins of oriental silks such as these made them treasured items in the West. Made up into vestments, they endowed their wearers with dignity, rank and prestige.
Byzantium or the Orient, 1st half of the 11th century, silk (samite), tablet weaving, pearls, semiprecious stones, h. 152.5 cm, inv. no. 232 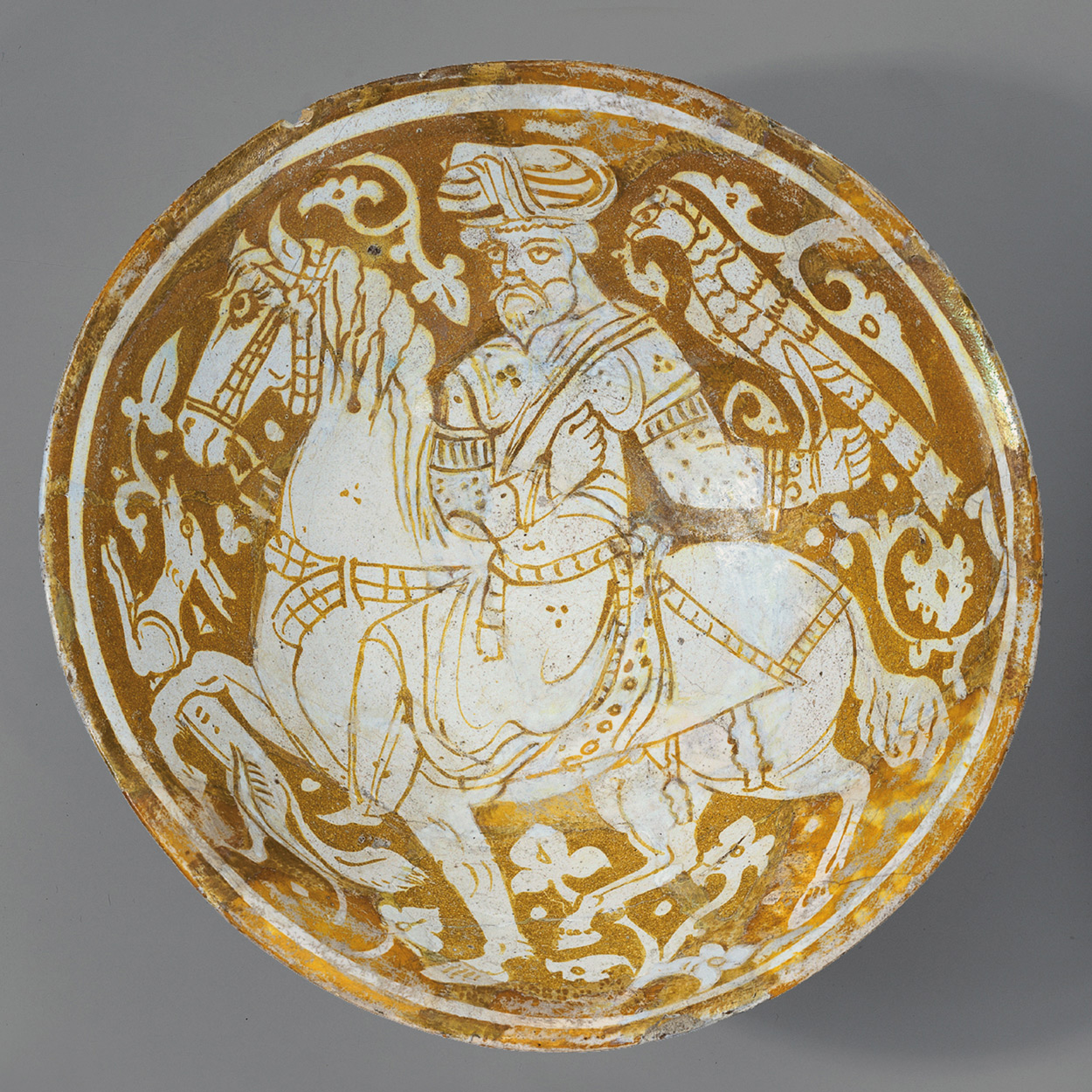 Among the most exceptional artefacts produced under the new Fatimid Dynasty in Egypt (969–1171) was lustreware decorated with figural scenes, of which this bowl is an excellent example. Remarkable for its vitality and expressiveness, the motif done by reserve technique was drawn with free-flowing brushstrokes against a lustre-coloured ground. Its theme – falconry – reflects life at the Fatimid court.
Egypt, 10th–11th century, earthenware, lustred decoration, diam. 24 cm, inv. no. 3.101.68 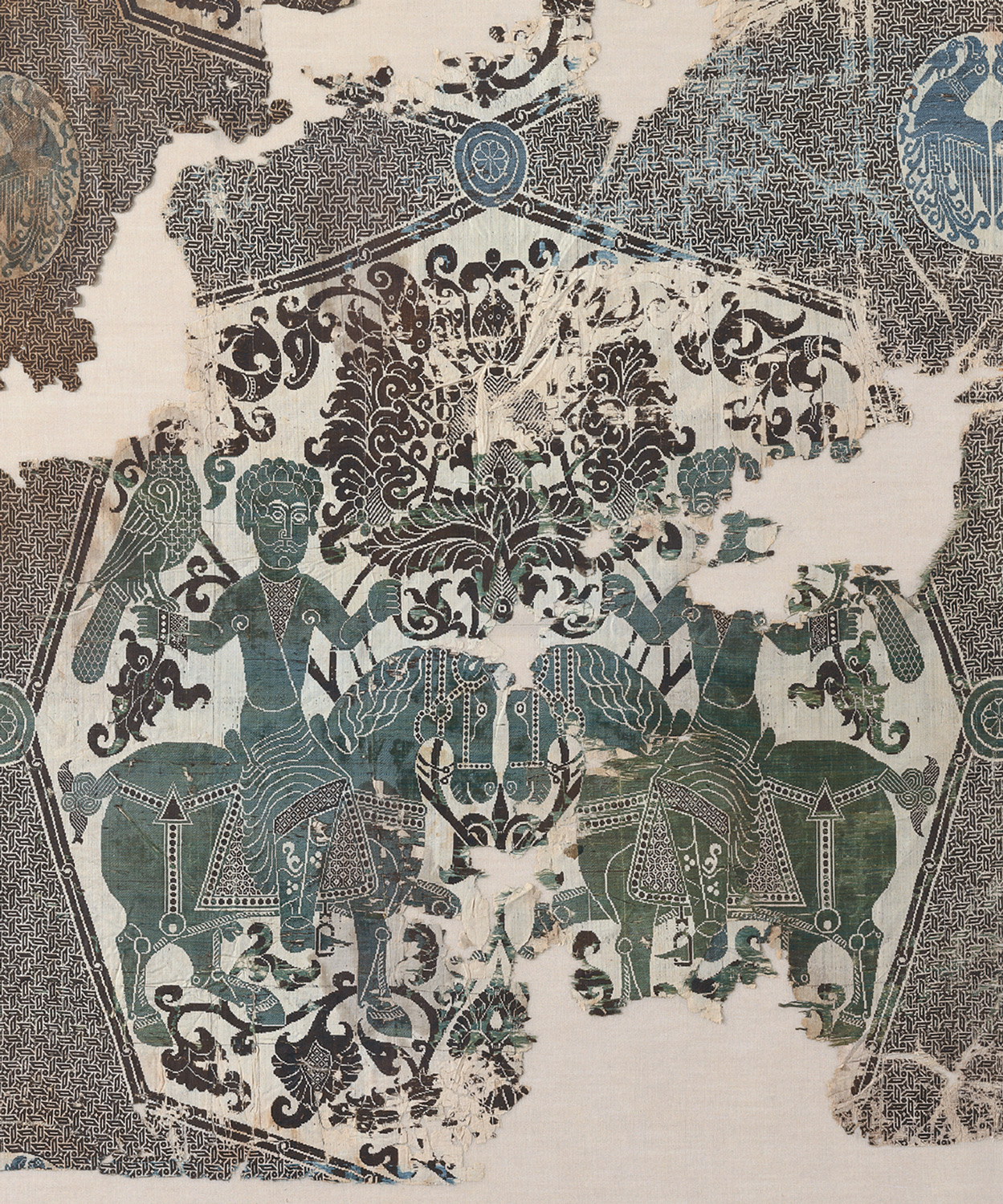 This beautiful silk is patterned with large octagonal medallions, each of which contains two falconers on horseback, their falcons perched on their arms, flanking an extravagant tree. The motif is remarkable for its intricacy and finely drawn lines. The falconers’ robes, highly ornate boots and saddlecloths and the superbly decked out horses are all reproduced in lavish detail.
Iran, 11th century, silk (double-weave lancé silk), h. 152 cm, w. 117 cm, inv. no. 1143 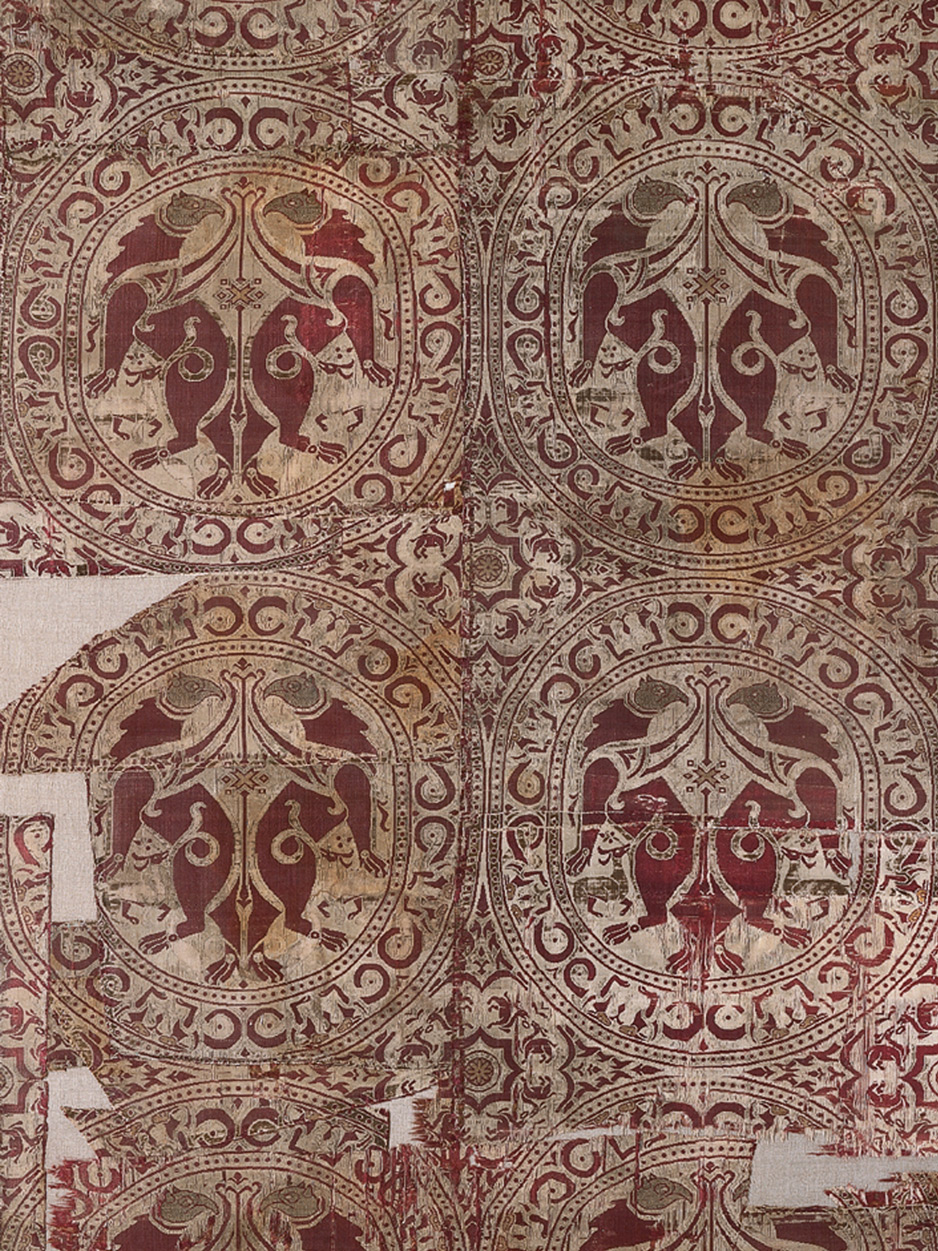 Islamic Spain was another important centre of medieval silk weaving after Byzantium and the Orient. Workshops in Almería, Granada, Córdoba and other such cities produced sumptuous fabrics of the very highest quality that were highly prized even in the Christian parts of Spain. This griffin silk comes from the shrine of Saint Liberata in Siguenza (Central Spain). The saint’s relics were transferred from the Islamic to the Christian part of Spain between 1147 and 1157. Among the costly fabrics used to wrap them was this magnificent silk.
Spain, 1st half of the 12th century, silk (lampas), h. 137 cm, w. 59 cm, inv. no. 2656/2660

The two Marys from a crucifixion scene

Limoges was a thriving centre for the manufacture of enameled liturgical plate in the High Middle Ages. Its workshops produced not just small items but also monumental reliquary shrines and altar frontals. This relief of the two grief-stricken Marys originally belonged to a larger crucifixion scene which also showed the Apostle John at the foot of the cross. Probably, it was part of a Passion cycle mounted on a shrine or altar frontal with enamelled ground plates.
Limoges, 1240–1250, copper gilt, embossed, h. 24.1 cm, inv. no. 8.59.63

END_OF_DOCUMENT_TOKEN_TO_BE_REPLACED 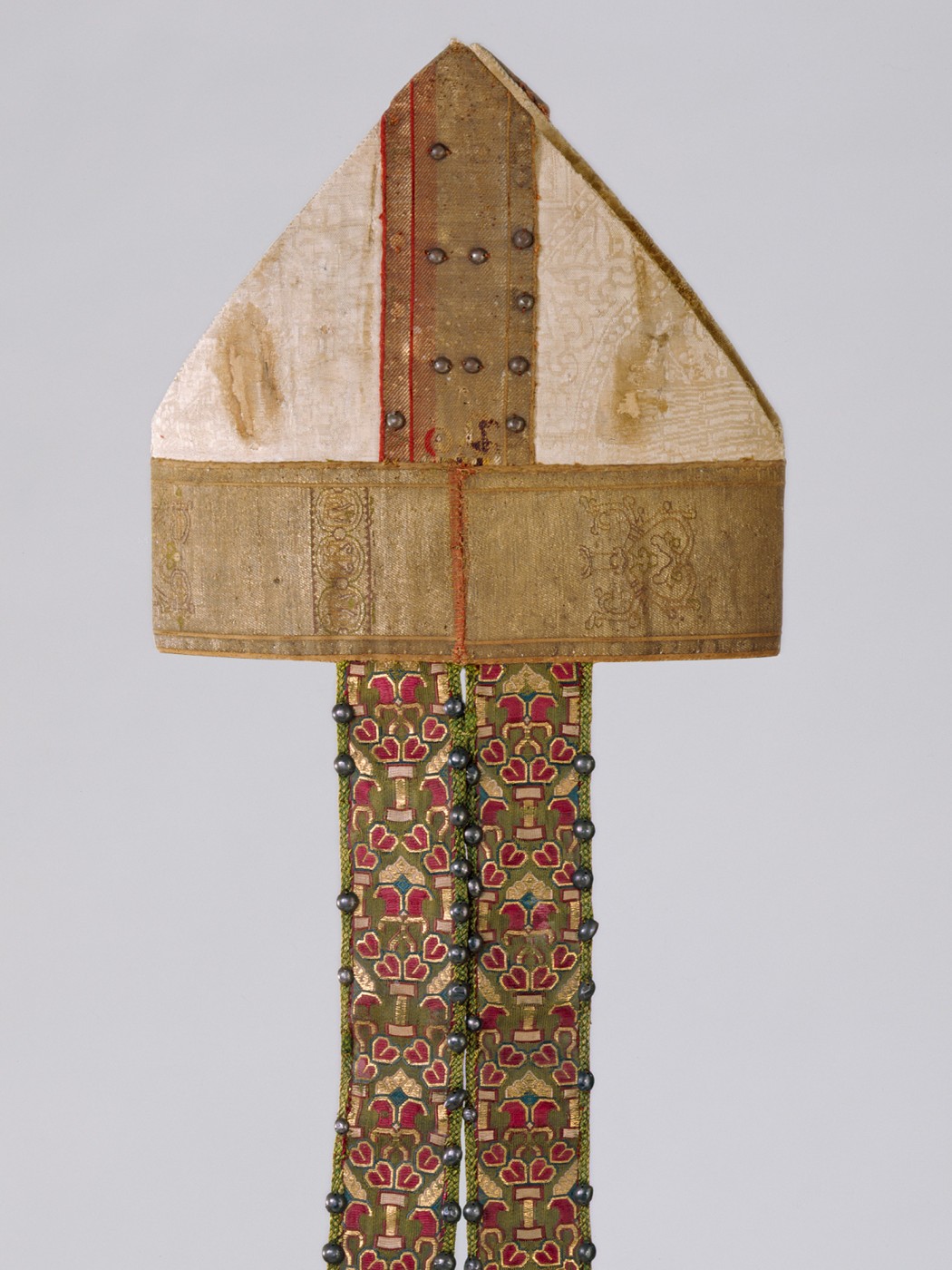 Mitre from St Peter’s in Salzburg

The Abbot of the Benedictine Abbey of St Peter’s in Salzburg was granted the right to wear a mitre as a sign of his high office in 1231. The choice of textiles that already counted as old and venerable for the manufacture of this mitre seems to have been deliberate. This is true not only of the white cloth used for the ground, but also of the two sorts of very fine gold orphreys and above all the hangings made of a brightly coloured tablet-woven silk of Central Asian origin.
Salzburg, c. 1231, silk, tablet weaving, silver pearls, h. 77 cm, inv. no. 233

END_OF_DOCUMENT_TOKEN_TO_BE_REPLACED 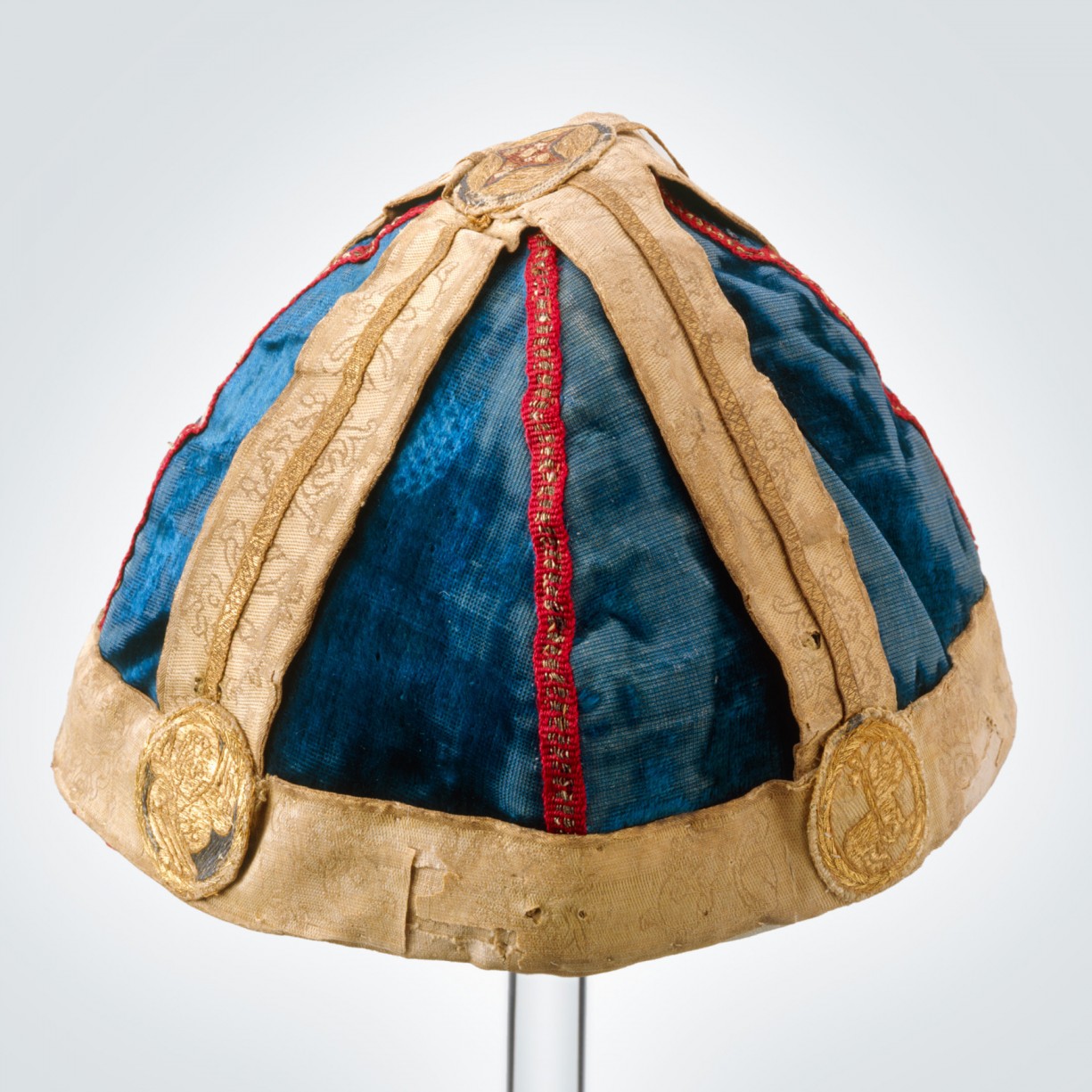 The crown is made up of bands of white silk with embroidered medallions. These show a Lamb of God, two angels, a king and, on the top of the crown, an allegory of the Trinity. In her writings Hildegard von Bingen describes the headdresses with which the nuns adorned themselves as having just such images. They were worn over the veil. The nun’s crown shown here is the only one from the Middle Ages to have survived. It is mounted on a more recent blue velvet cap so that the textile coronet, regarded as a relic of Saint Hildegard von Bingen, could be displayed and worshipped by the devout. | Silk band crown: Kloster Rupertsberg, 1170s; blue velvet cap: Trier, early 17th century, silk bands, gold trim, gold, silver and silk embroidery, h. 17 cm, inv. no. 5257