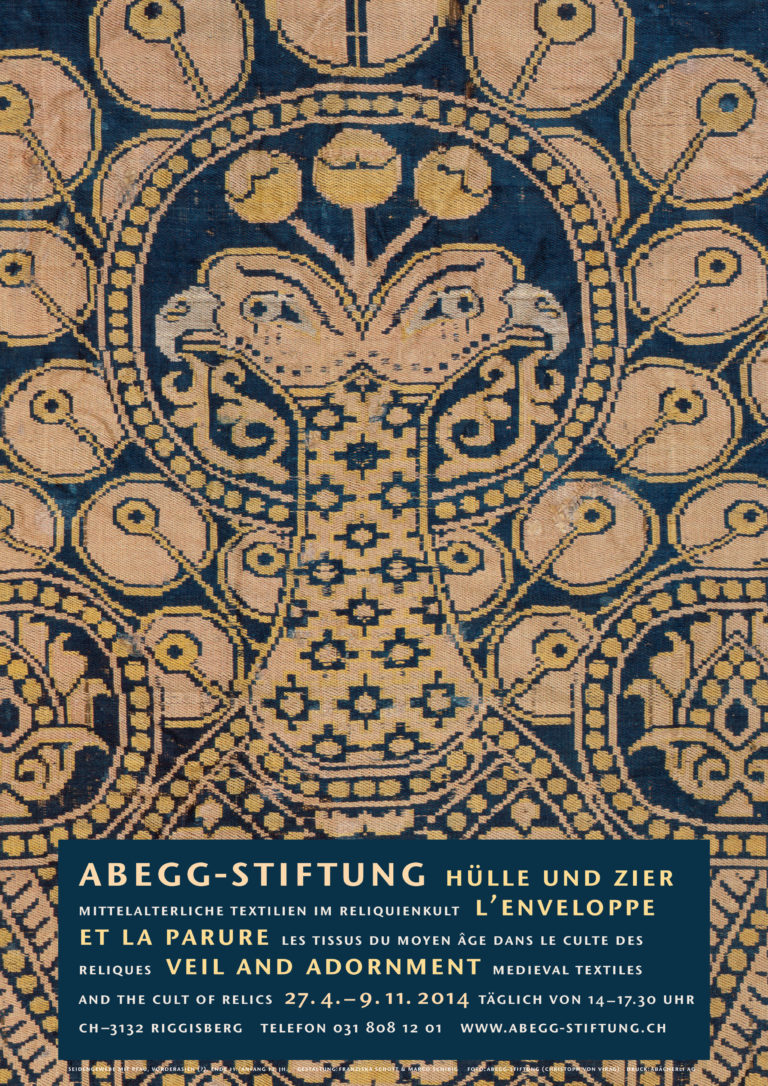 Veil and Adornment: Medieval Textiles and the Cult of Relics, 27 April – 9 November 2014

A relic may be the physical remains of a saint, an object touched by the saint while alive, or a memento of the places where Jesus taught and suffered. As material testimonies to the faith, relics were greatly venerated during the Middle Ages. They were collected, given as gifts, traded, displayed for public veneration, and placed in shrines made of precious metals. Textiles played an important role in connection with relics. The holy remains, from whole bodies to splinters of bone, always rested in their shrines or reliquaries shrouded in fabric, tied with cords, and often bearing an inscription identifying the saint. Items of clothing worn by saints were also venerated as relics and were carefully preserved to protect them against the ravages of time. 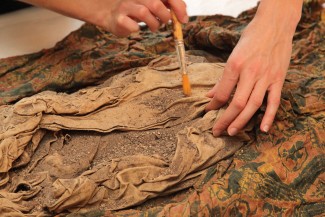 The fabrics from the Hildesheim Godehard shrine were removed in 2009 and have since then been conserved at the Abegg-Stiftung. The fabrics from the Candidus reliquary in Saint-Maurice have never before been shown to the public either. After the special exhibition in Riggisberg in 2014, the textiles will be returned to Germany and to the Canton of Valais. Fig.: Relics and textiles from the shrine of Saint Godehard are carefully separated by a textile conservator. 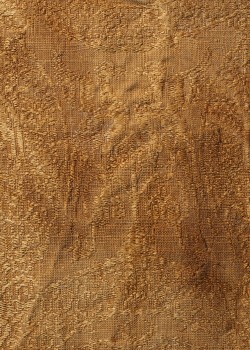 A Historical Saint Bishop Godehard of Hildesheim lived to a great age and died in 1038. As befitted his station, he was buried in the cathedral dressed in his liturgical vestments. After his canonisation in 1131, both his bones and his grave clothes were transferred to a reliquary shrine and thus preserved. Fig.: Detail of the dalmatica from the tomb of Saint Godehard, Bishop of Hildesheim († 1038), silk weaving, Byzantium, early 11th century, Hildesheim, Dom-Museum, inv. no. D 2009-4b.01 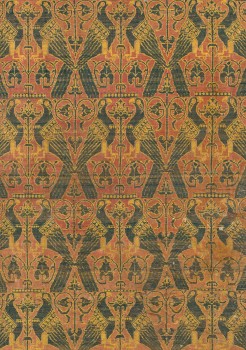 Magnificent Accoutrements The relics of Saint Godehard were wrapped in five bundles inside the shrine. Silks with large patterns as well as white linen cloths served as wrappings. The interior of the shrine itself was lined with a whole length of costly Spanish silk. Fig.: Bird silk, Spain, early 12th century, Hildesheim, Dom-Museum, inv. no. D 2009-4d 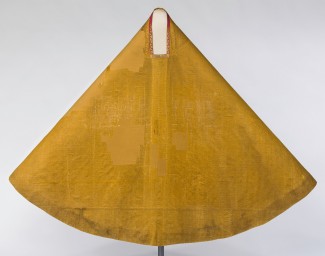 The Bernward Chasuble Made of magnificent Byzantine silk, this vestment was probably a gift from Bishop Bernward of Hildesheim (d. 1022) to the monastery founded by him. After his canonisation, several pieces of silk were cut out of it and given away as relics. Fig.: The Bernward Chasuble, silk fabric: Near East (Byzantium?), early 11th century, Hildesheim, Dom-Museum, inv. no. DS 83 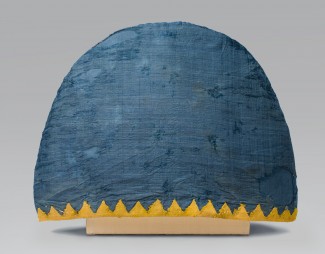 A Vast Array of Relic Wrappings The Saint Candidus head reliquary from the treasury of the Abbey of Saint-Maurice contained not only the skull of Candidus, but also some tiny remains of other saints. All were wrapped in pieces of fabric, some of which date from the time of the abbey s founding in the early sixth century. Fig.: Blue silk cap, 12th century (?), Abbey of Saint-Maurice 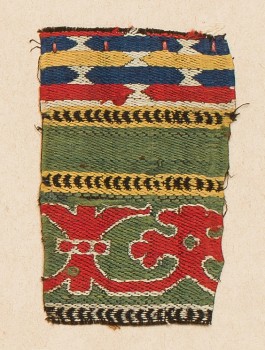 From Objects of Cult to Objects of Study The first scholarly publication of the treasury of relics formerly owned by the Collegiate Church of Saint Blaise in Braunschweig dates from the nineteenth century. At that time, the most beautiful fabrics in the collection were mounted on cardboard for research purposes and thereafter stored separately. They were purchased at auction by the Abegg-Stiftung in 2005. Fig.: Silk weaving with starkfarbigem Streifenmuster, Italy or Spain (?), 13th century, mounting c. 1890, inv. no. 5478 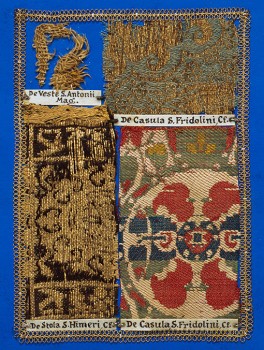 An Arrangement of Relics Around 1900, a small collection of fragments of various famous textile relics was painstakingly assembled on a small cardboard panel and carefully labelled. Set in a frame, this collection may have served as an object of private devotion. Fig.: An arrangement of relics, various fabrics woven with silk and metal threads, 9th to 14th century (?), mounting c. 1900, Benedictine Abbey of Mariastein
Media Release 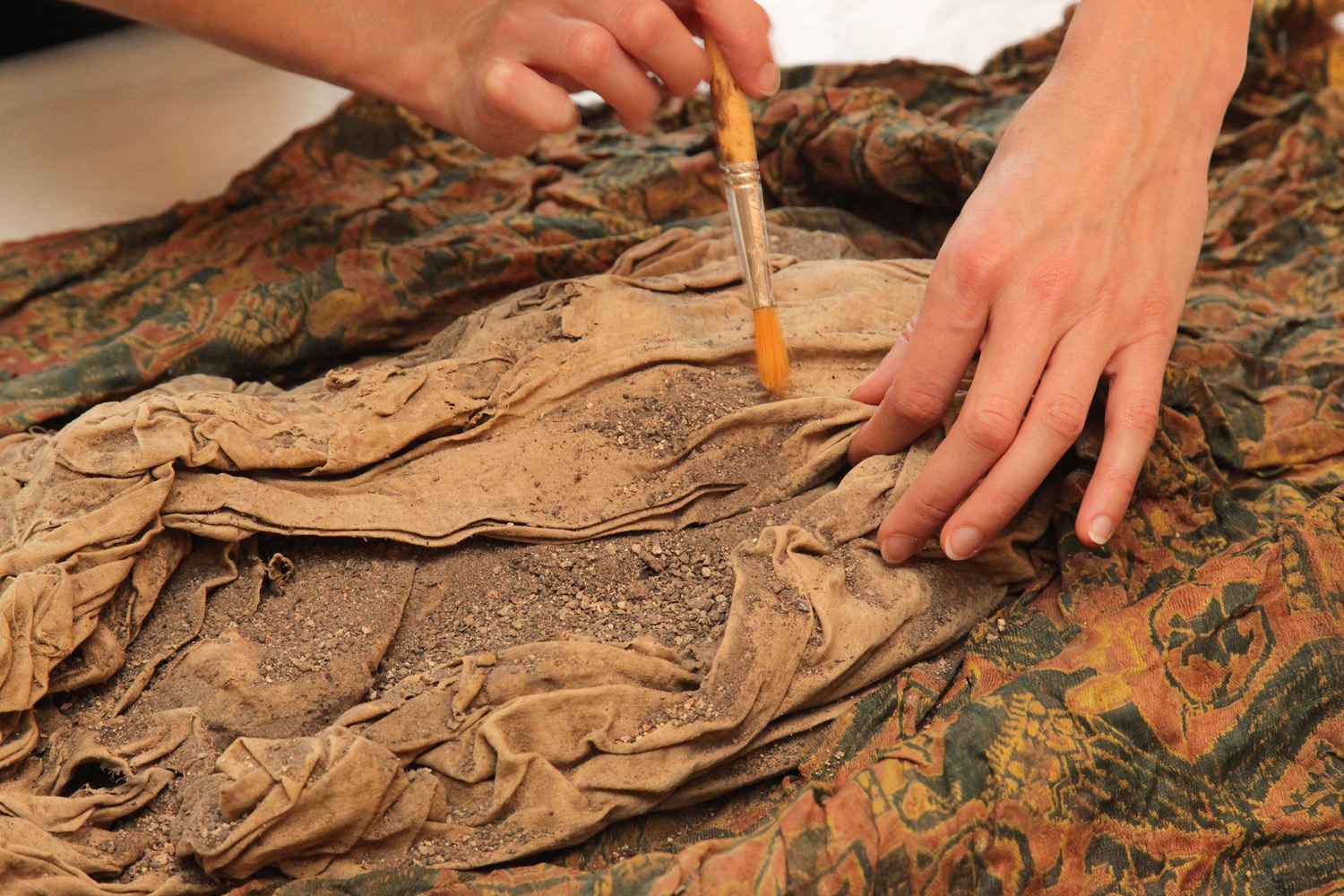 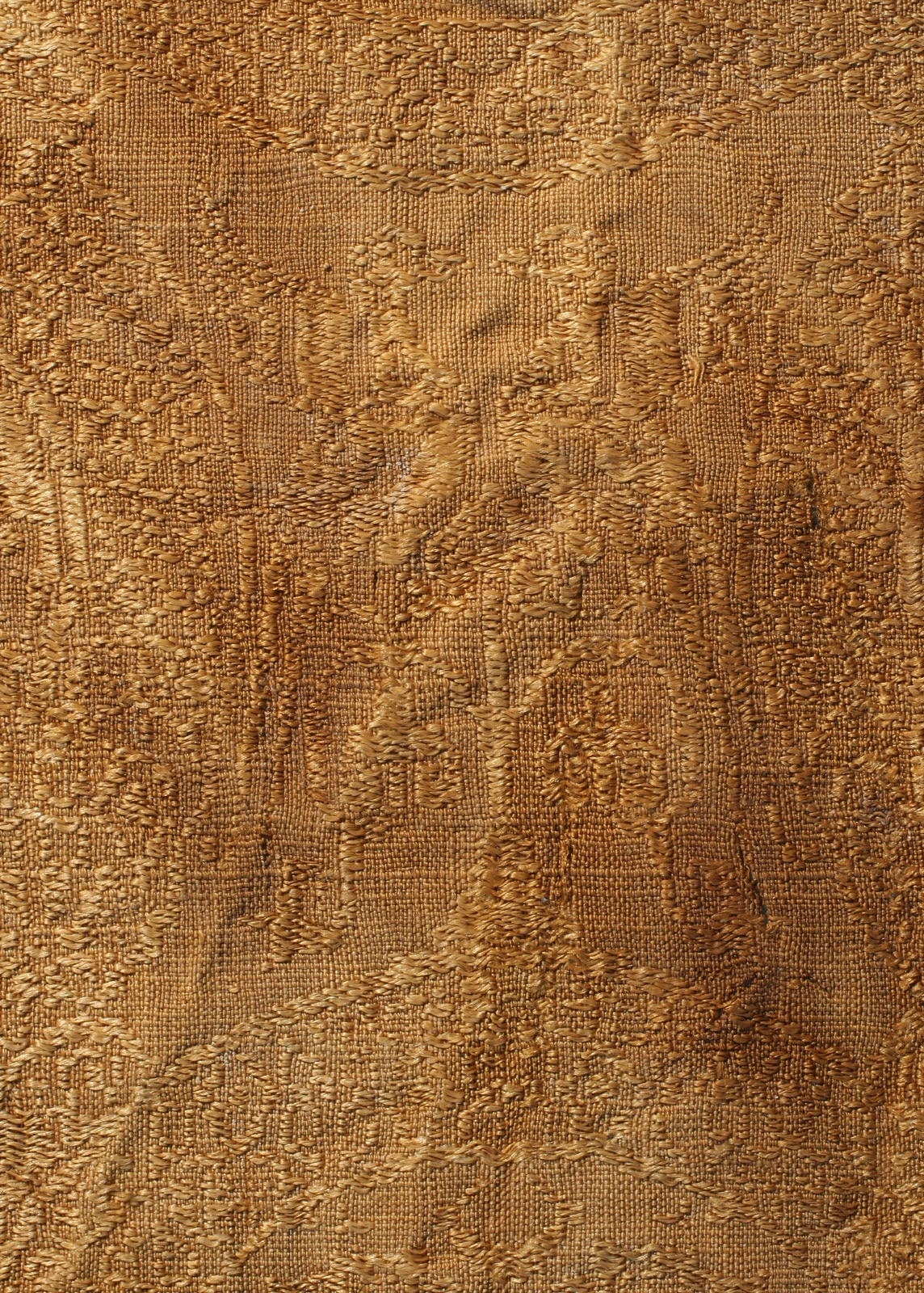 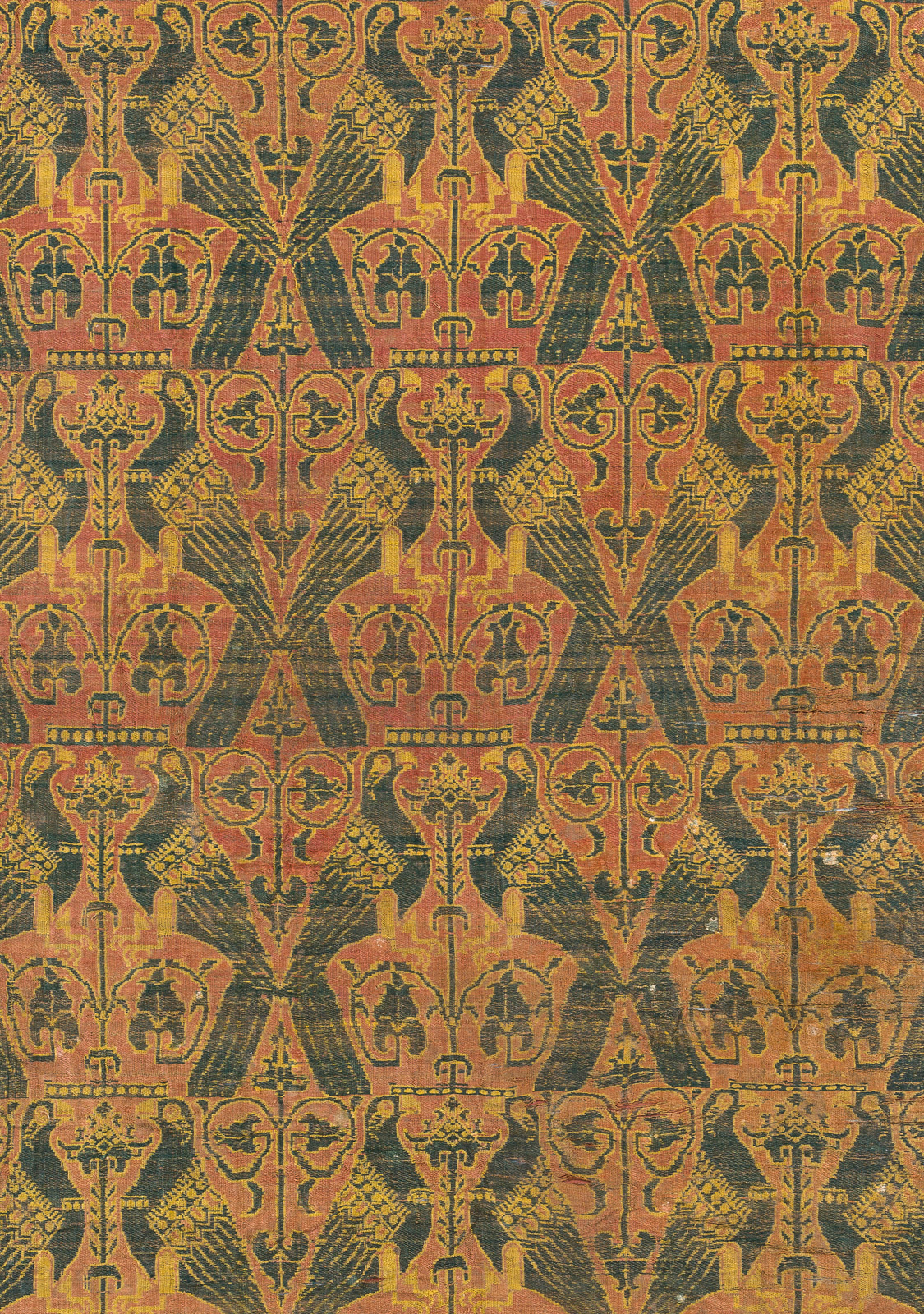 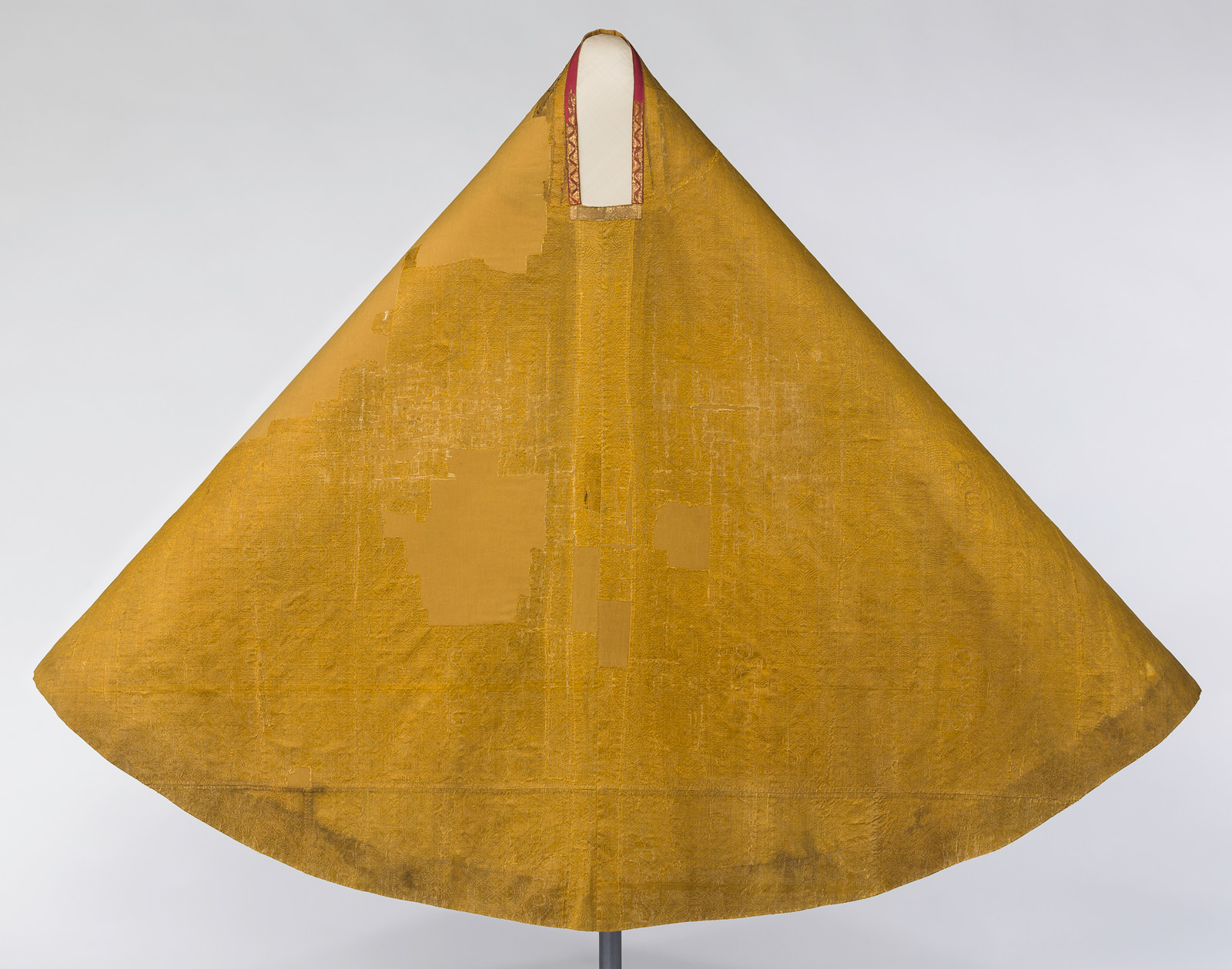 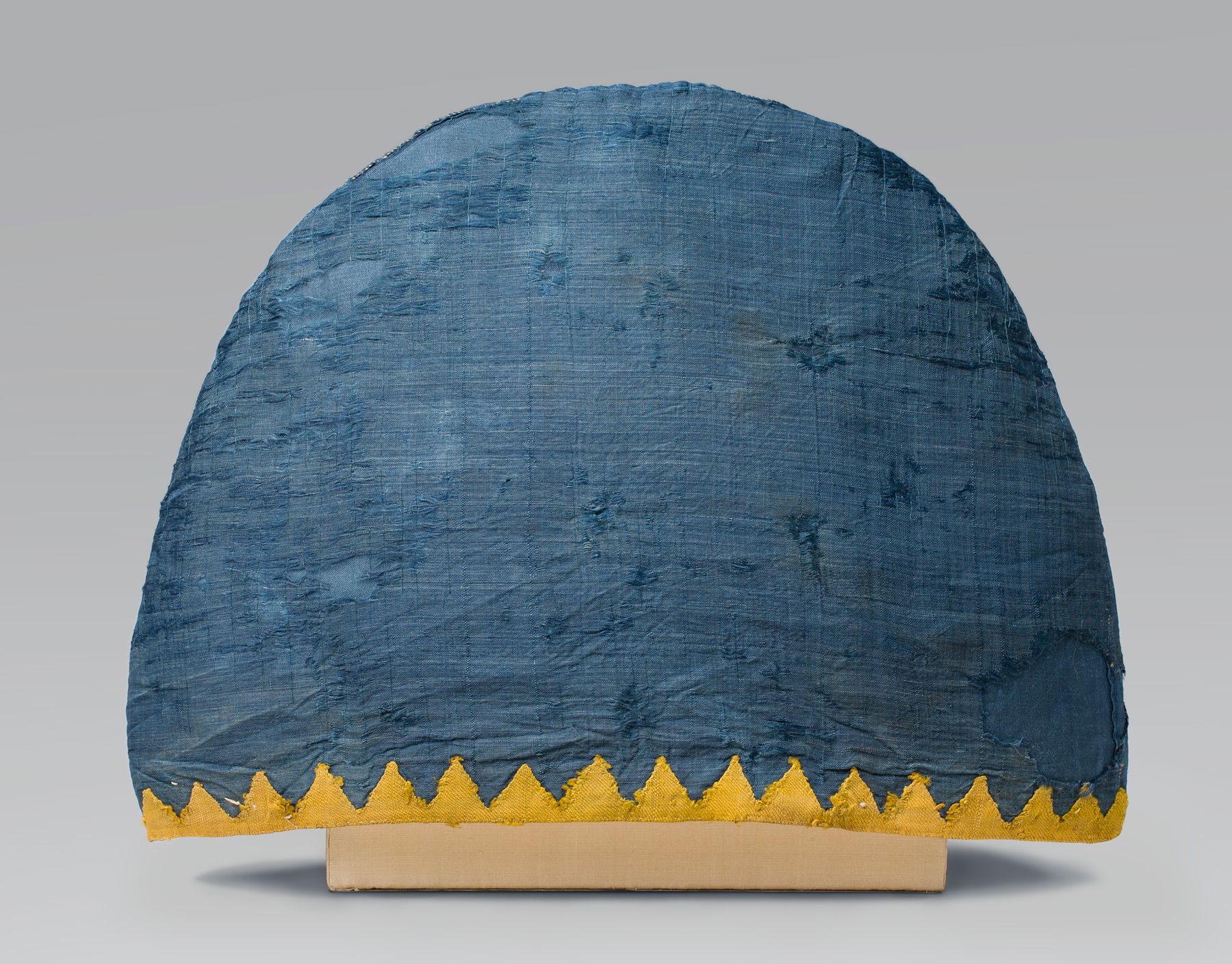 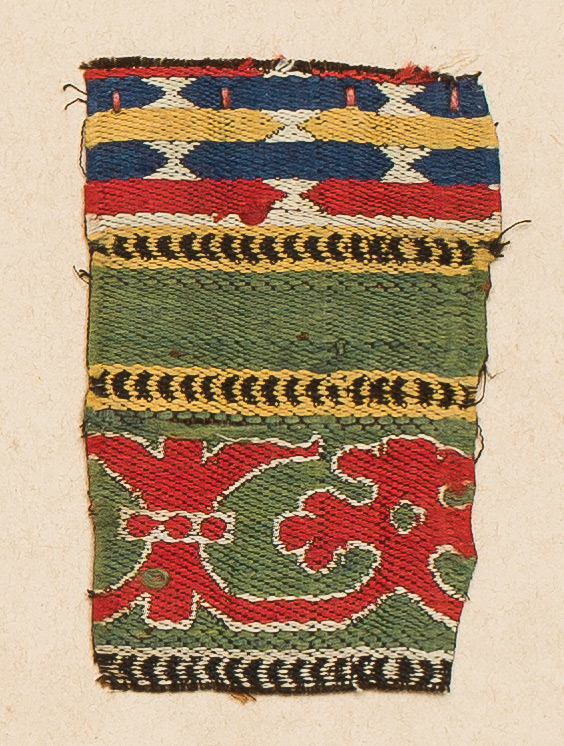 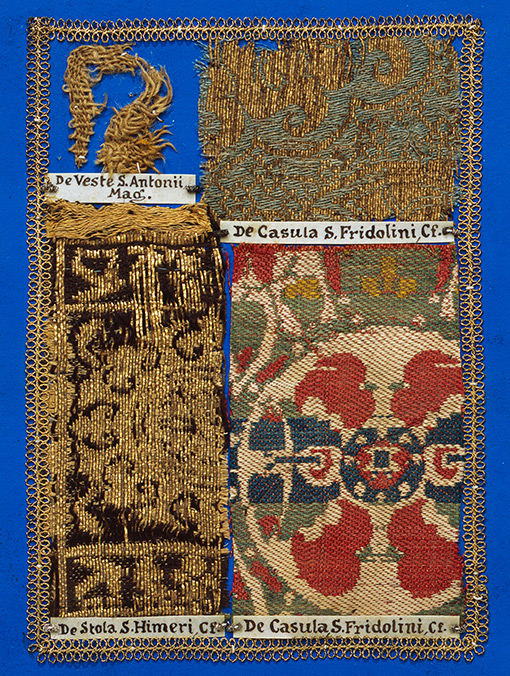 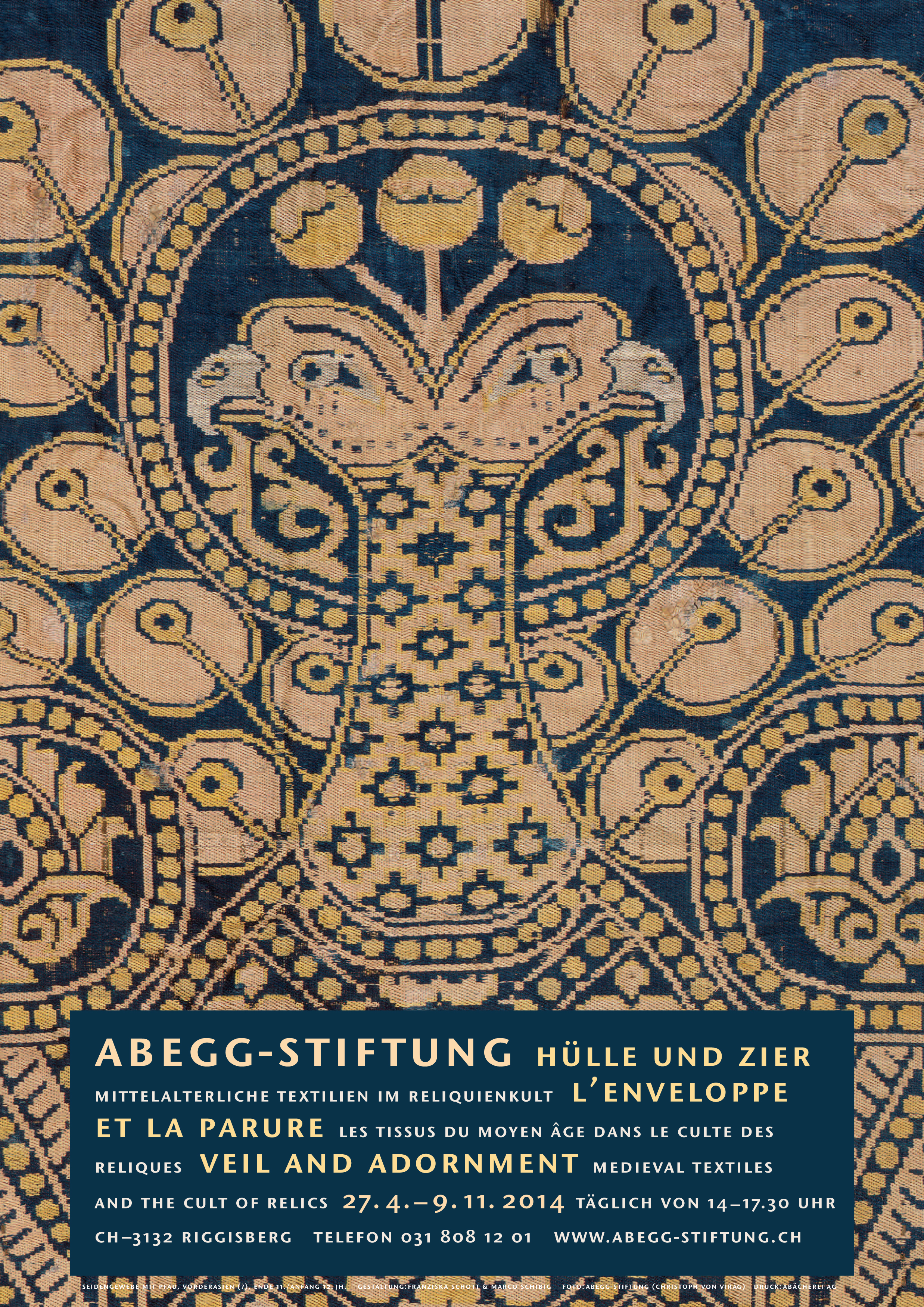