Most of the fabrics for new church hangings in the 14th and 15th centuries were made in Europe. Italy was especially important as a source of multi-coloured, lavishly patterned silks, shot through with gold. Embroidery also thrived, producing masterfully worked figures and scenes in the Christian tradition. Similar motifs can be seen in the exquisite examples of sacred paintings and wood carvings in the Abegg-Stiftung’s permanent exhibition. 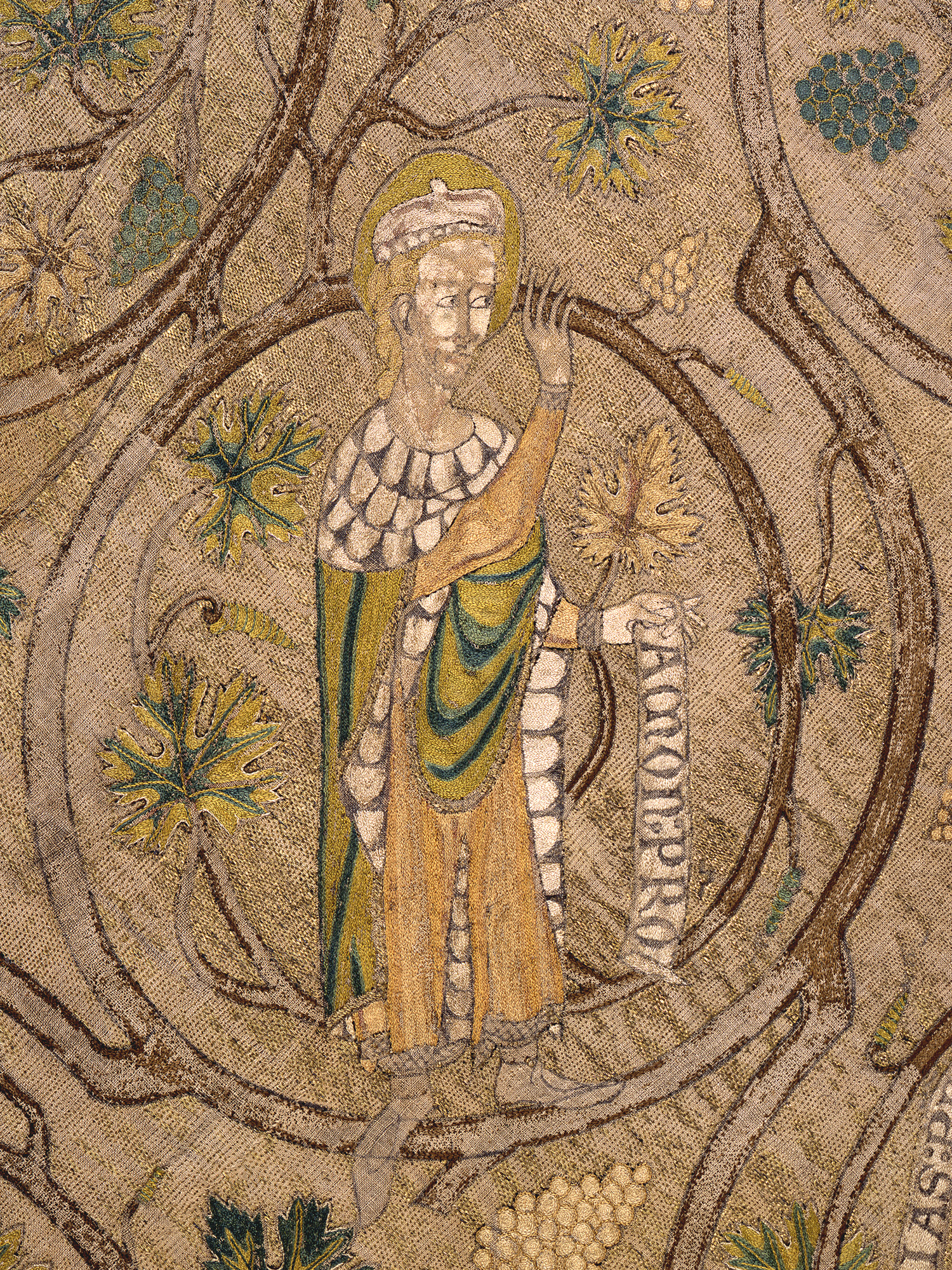 Cope with Tree of Jesse

This cope was worn for processions and consecrations. It shows Old Testament prophets and kings inside medallions formed by curled vine tendrils. The root of the tree – Christ’s family tree – on the back of the pluvial was cut out at some point, but would have shown Jesse, fast asleep and dreaming. Such splendid vestments, embroidered with gold and coloured silks creating some very painterly effects, were a speciality of English embroiderers, who supplied several popes and numerous European church dignitaries, including the Archbishop of Salzburg, Conrad IV of Fohnsdorf (1291–1312).
England, ca. 1290–1300, gold and silk embroidery on linen, h. 137 cm, inv. no. 231 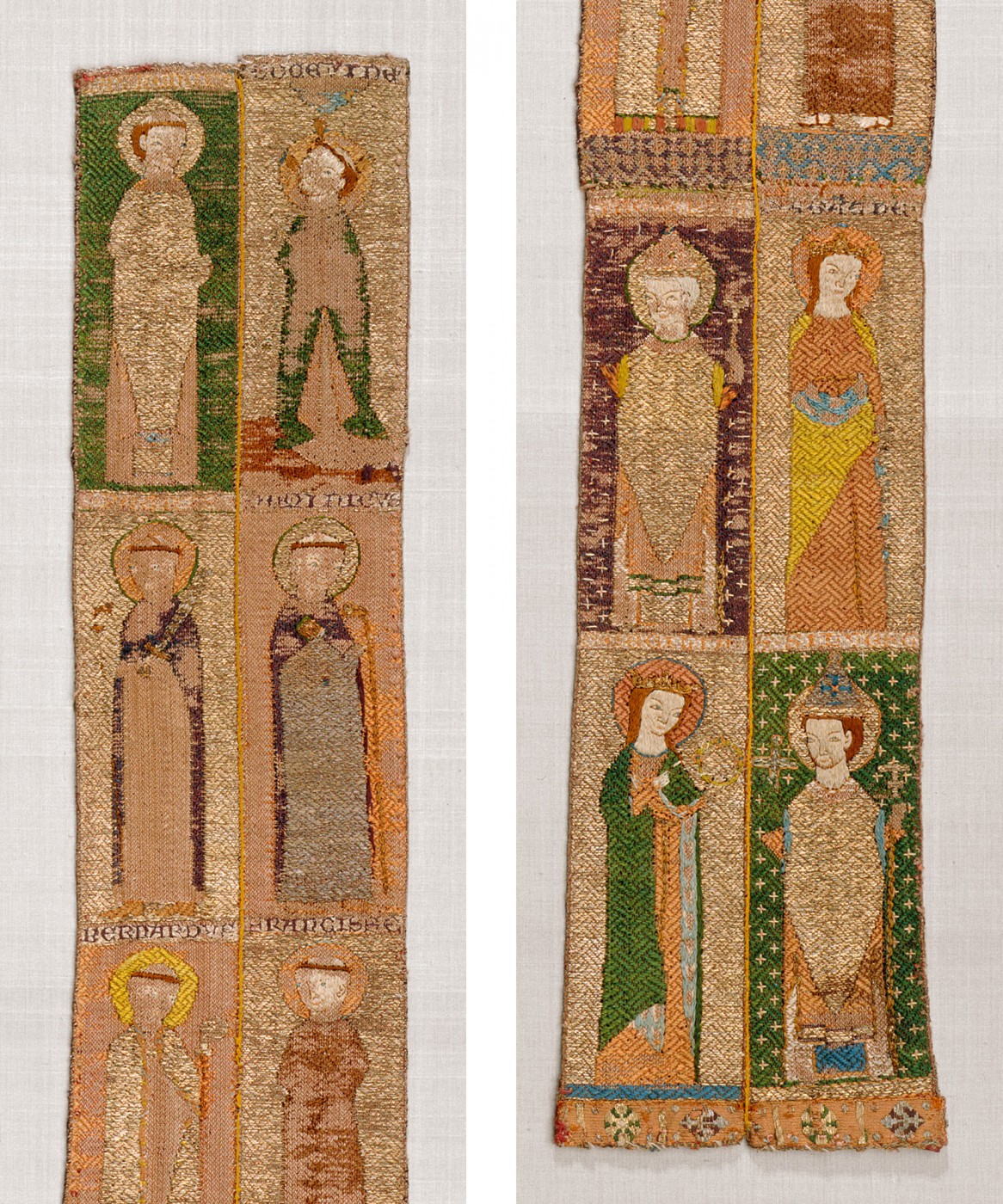 This orphrey owes its appearance to a combination of tablet-weaving and embroidery. It shows Saints Lawrence and Stephen, followed by the saints of the great medieval orders, namely Peter the Martyr and Dominic, Bernhard of Clairvaux and Francis of Assisi, all of whom are named by name. Especially remarkable is the depiction of saints from several different orders, some of whom had not been venerated for very long. This suggests that the orphrey was made in a convent, possibly to propagate the cult of the convent’s own patron saint.
Rhineland (?), late 13th to early 14th century, tablet weaving, embroidered, h. 90 cm, w. 15 cm, inv. no. 5542 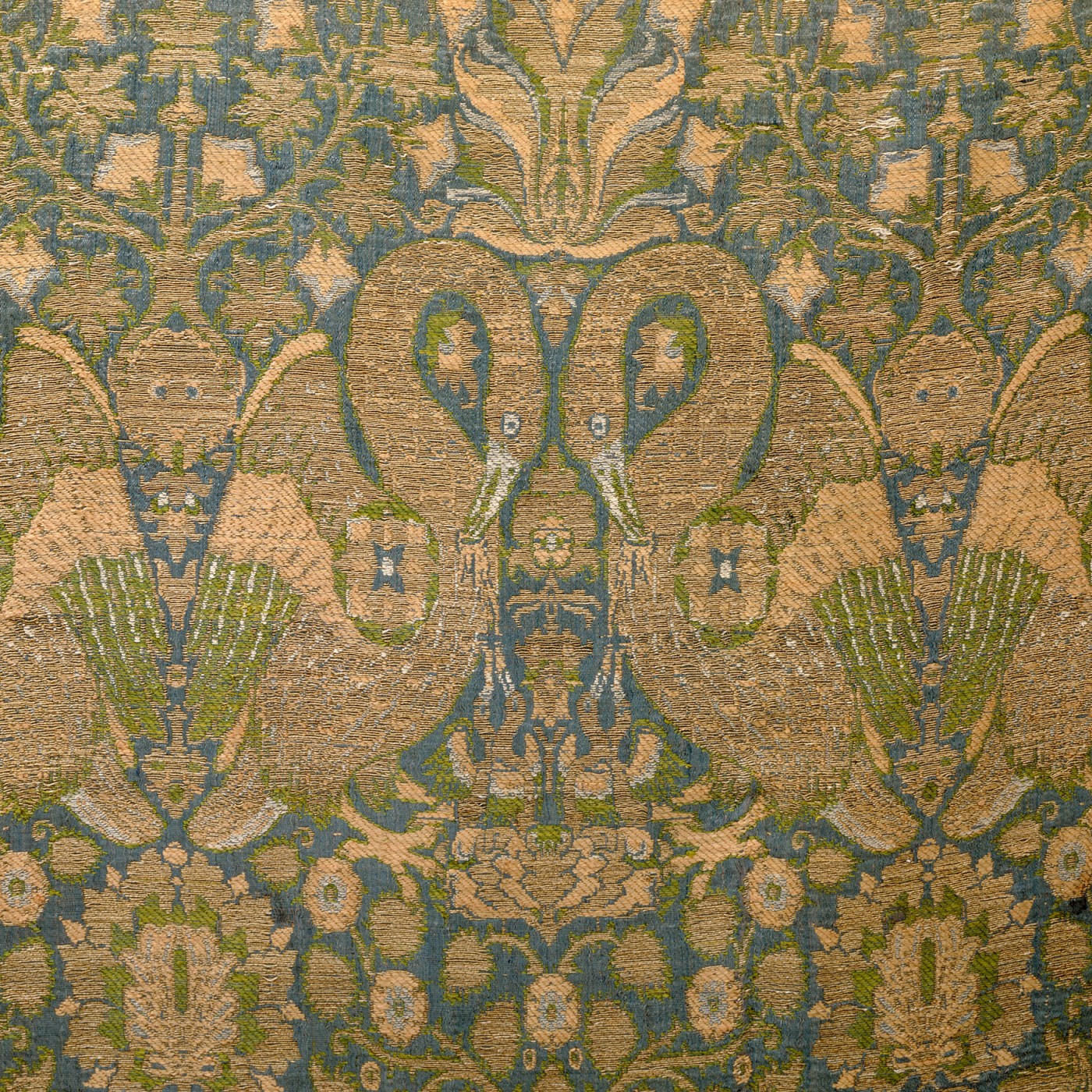 The sumptuous fabrics used to make this deacon’s vestment come from several different countries. The main fabric is an Italian lampas silk patterned with dogs and the Christological motif of the pelican feeding its own blood to its young. The sleeves are made of a Spanish silk patterned with a courtly device, while a Chinese or possibly Persian silk was used for the side pieces. The matching vestment worn by the subdeacon is to be found in the Hanseatic city of Stralsund in northern Germany, which is home to a large collection treasure of costly medieval vestments.
Stralsund, 15th century, fabrics from Italy, China or Persia, Spain and Germany, 13th–14th century, silk (lampas, samite), tablet weaving, h. 120 cm, w. 142 cm, inv. no. 152 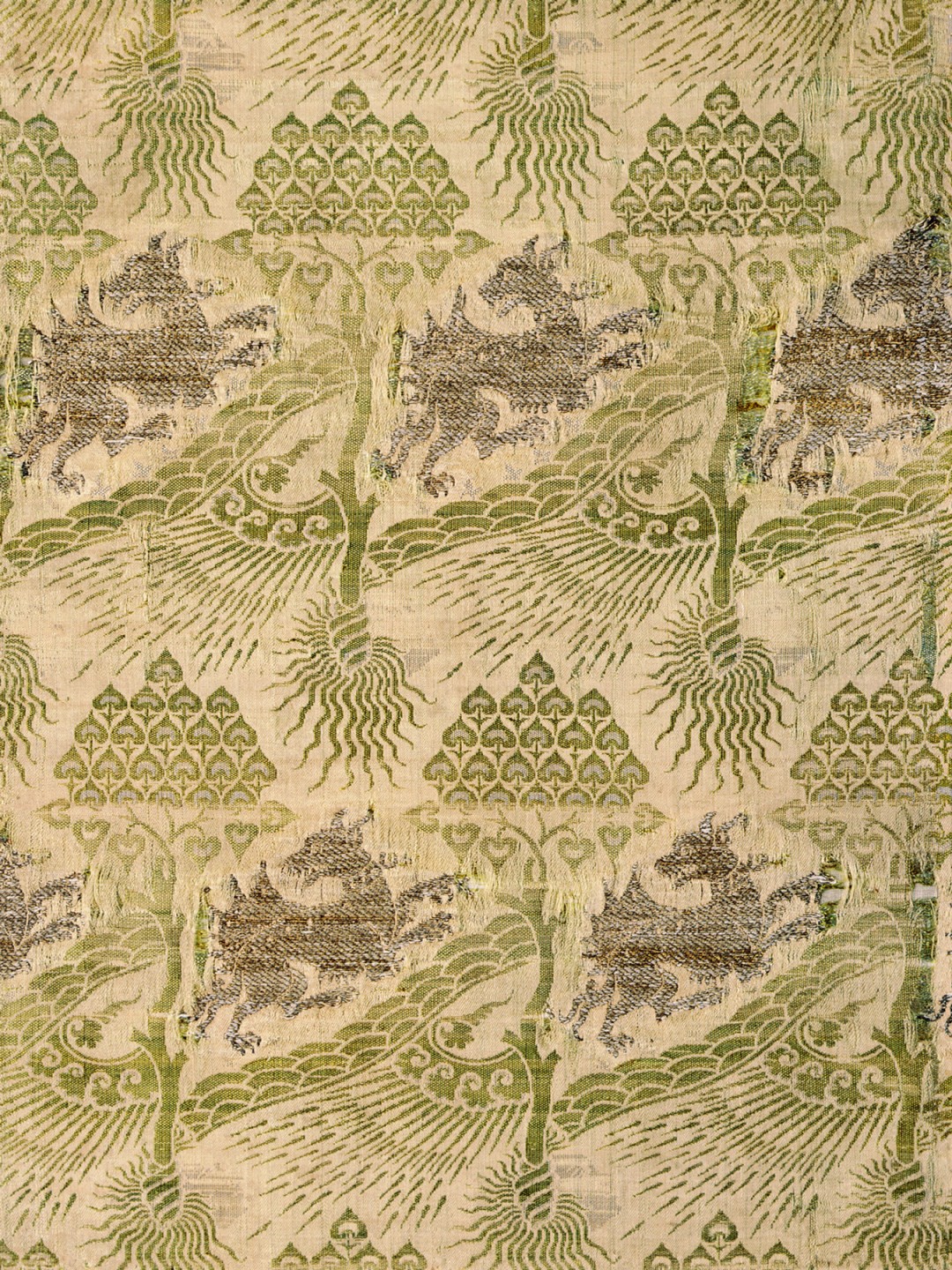 This silk shows a mythical creature with pointed ears, forked tail and scales cavorting between stylised landscape motifs. While the staggered clusters of trees with heart-shaped leaves recall conventional pointed-oval patterns, the diagonal arrangement of a stream and sunbeams radiating from a band of cloud lend the pattern a powerful upward dynamic. The creature’s jagged silhouette recalls Chinese models, while the landscape motifs seem to be drawn from Persian book illumination.
Italy, 2nd quarter to the 2nd half of the 14th century, silk (lampas), h. 42 cm, w. 32 cm, inv. no. 456 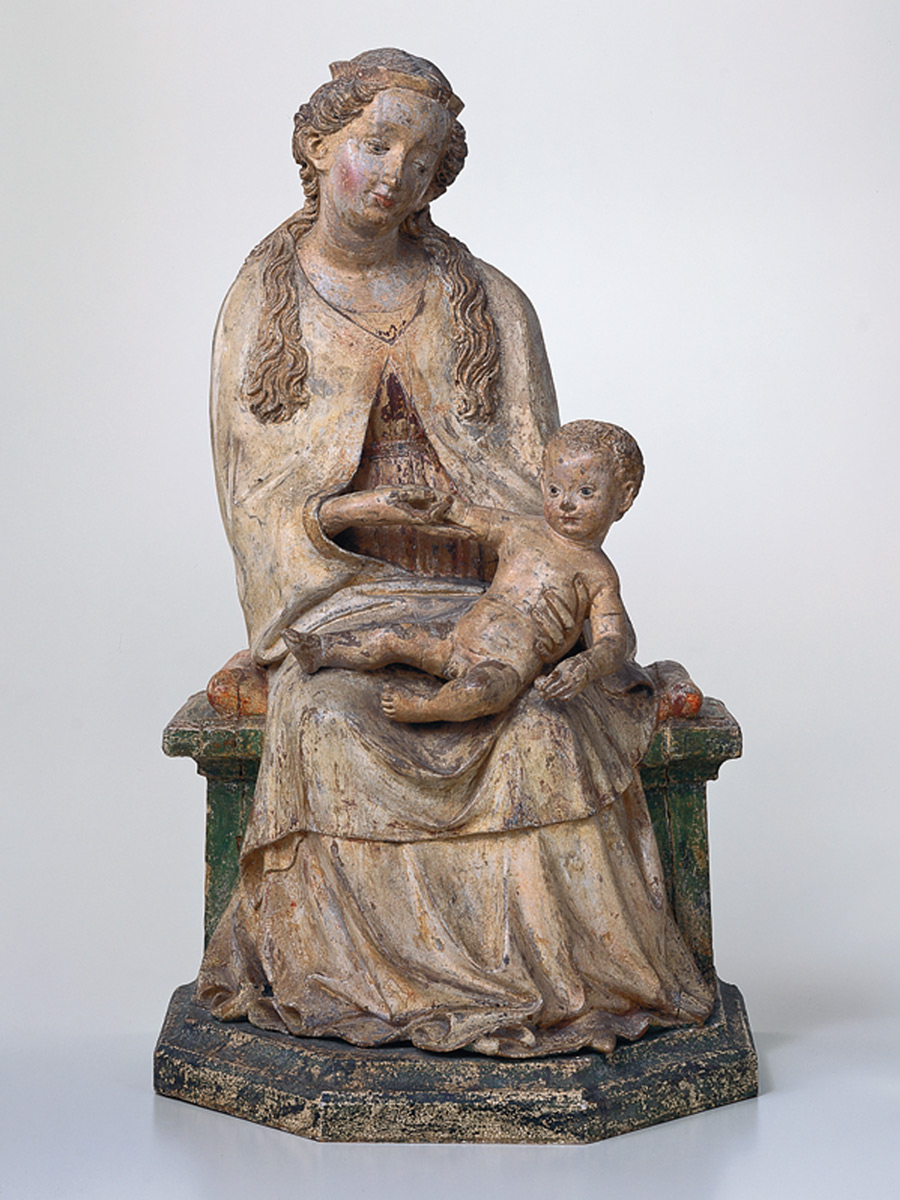 With her head bowed slightly to one side, Mary gazes at the unclothed Christ Child in her lap, tenderly holding his right hand in her own, in a gesture of betrothal. The fingers of her left hand pressing into his pliant flesh can be read as a subtle allusion to what will be his sacrificial death on the cross. The sculpture attributed by some scholars to Hans Multscher (1400–1467) combines the soft palette and elegance of International Gothic style around 1400 with restrained but no less affecting modelling.
Middle Rhine, ca. 1425–1430, walnut and soft wood, polychromy, h. 67 cm, inv. no. 11.44.75

In keeping with the function of the chasuble as a liturgical vestment to be worn while celebrating Mass, this orphrey is decorated with a crucifixion scene. It shows Christ hanging on the cross, mourned over by God the Father inside a radiant mandorla and surrounded by angels holding out chalices to catch the sacrificial victim’s blood. The man depicted below this scene is the centurion, who according to the Gospel recognized Jesus as the Son of God. The exceptionally fine embroidery done in gold, silver and silk thread produces some remarkable glazing effects, thus showing the influence of Burgundian embroidery of the 15th century.
England, 3rd quarter of the 15th century, gold and silk embroidery on linen, h. 115 cm, w. 61 cm, inv. no. 5527 Triptych with the Crucifixion of Christ

Rogier van der Weyden, workshop, ca. 1440–1445
The crucifixion group on the central panel reuses motifs from earlier works by Rogier van der Weyden. The figures’ expressive gesturing greatly adds to the drama of the scene. The drapery includes robes made of sumptuous Italian velvet and fine Netherlandish linen. The winged altarpiece used to hang in the Dominican church of Chieri in Piedmont. It was commissioned by a member of the De Villa family of bankers, whose crest adorns the window on the left wing.
Oil on oak, h. 103.5 cm, inv. no. 14.2.63 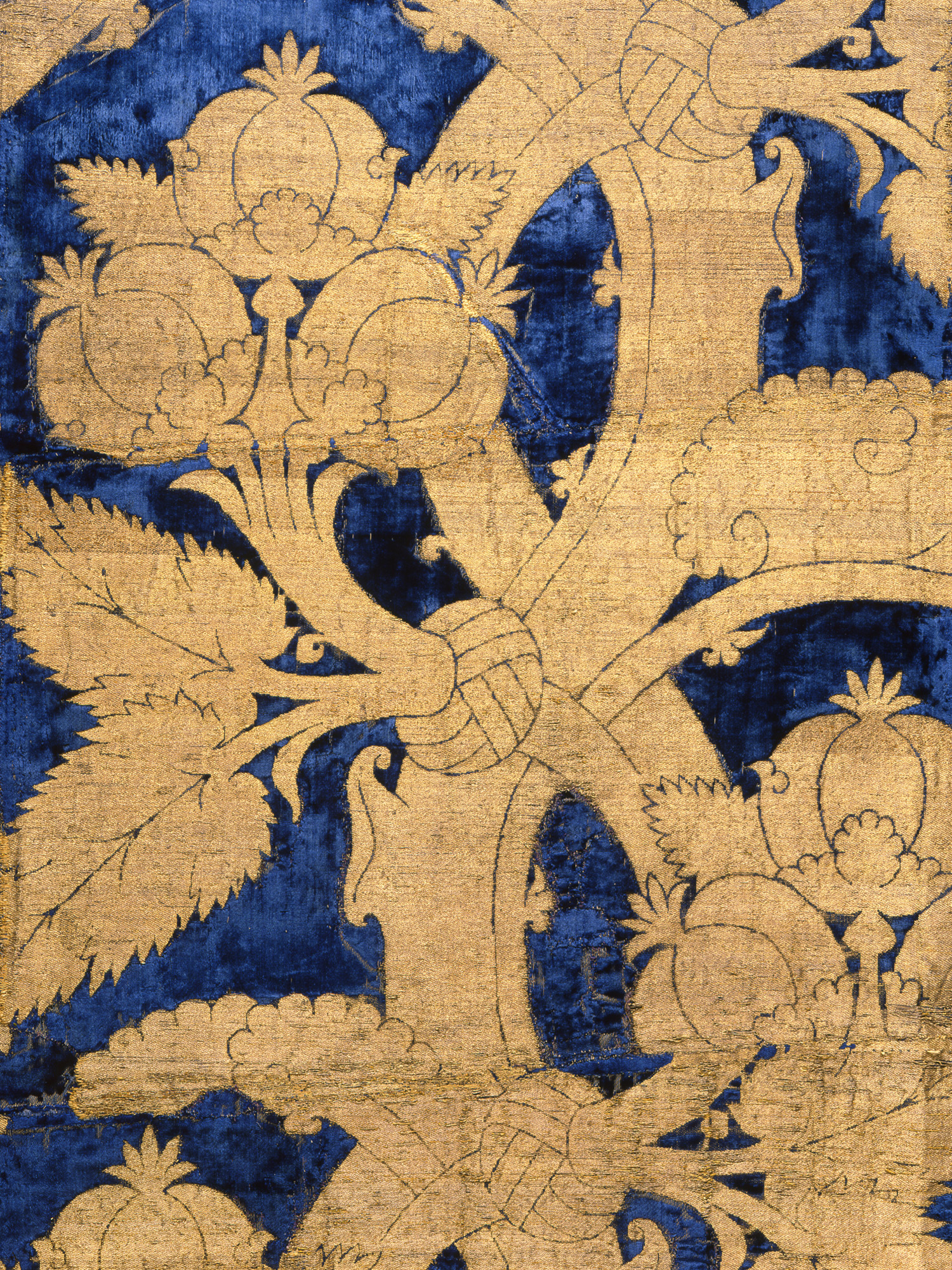 Stylised pomegranates are among the motifs that typically feature on Italian textiles of the Late Middle Ages. Whereas other velvets tend to show only the stylised outlines, however, the pomegranates on this one are modelled so as to look three-dimensional. The overlapping branches and delicate lines accentuating the round shape of the fruits create an impression of depth. Italian velvets with gold brocading were luxury export items and feature in numerous paintings both south and north of the Alps.
Italy, mid-15th century, silk, metal threads, h. 100 cm, inv. no. 818